Date: August 4 2014 Tags: Architecture, city, Graphic Design, Illustration, Interior
This theatrical and intensive interior has been designed for a small pizzeria (which has 119 square meters without kitchen space) with a bar, big window cases in a high-level location – in the main avenue in Vilnius, near Vilnius Cathedral and the Central Bank. The interior had to be designed in such a way, that clerks and the city visitors who come here for lunch, would want to come back in the evening, when the central avenue comes to life due to entertainment and night cocktail.
I decided (I had no other way out) to use four window cases stretching from the floor up to the ceiling, which, for the promenade of the avenue, open the scenery taking place in the pizzeria. Factually, the first two halls have become one huge window case in which visitors, waitresses and bartenders turn into mercurial mannequins highlighted by night lights, inviting passers-by to join them. When one drops in, he or she becomes a part of the night show, being observed from outside. However, the visitor does not have time to think about it as he or she is involved in the play of the lights and the scenery comprised of entirety of the interior. The play does not leave the visitor indifferent: either you immediately don’t like it – and you leave the place, or you are “sucked into it” and come here again and again. I did not plan to shock the public with unexpected solutions, which defy academic nutritional color research. I was just looking for a new identity, as sterile, “squeaky-clean” and architecturally “correct” interiors dominating in the environment impose their uniform esthetics, without giving a chance to choose, thus becoming dangerously assimilating while mimicking each other.
The need to optically expand insufficiently spacious premises of the pizzeria-cocktail bar have dictated certain graphical solutions for planes of the halls, which could create an illusion of divided walls, which could expand, “inflate” the ceiling and create an impression of glimmer and pulsation. I needed the effect which would amaze and cause predictable eye retina, taste receptors and nerve centers’ reactions. The interior space had to become a place which would live up to the modern life tempo that is amplified by energy levels and hormonal storms. Abstract background graphics, which can be described as vintage Decorative-romantics flavored with floristic, tattoo, grunge motives and op-art elements, while deleting boundaries among walls and ceiling and passing from one room to another, may invoke a zero gravity sensation upon a visitor (the strength of the traditional Lithuanian beer has nothing to do with this). Intertwining of graphics with space elements, thanks to reflections and LED lighting, creates a non-realistic space and unique psychedelic atmosphere. It is worth mentioning that the graphics and all the elements, including a spectacular upper bar section as well as decorative chandeliers, which shine with thousands of LED spots during the dark hour of the day, have been tailor-made and designed especially for this interior. The elements have been harmonized with each other in spite of certain primary chaotic impression.
The pizzeria-cocktail bar has 80 sitting places which, probably due to emigration, are never fully occupied at the same time. Irrespective of this, the pizzeria – cocktail bar may be considered to be a popular place in the Lithuanian capital, which is open until 3 a.m. 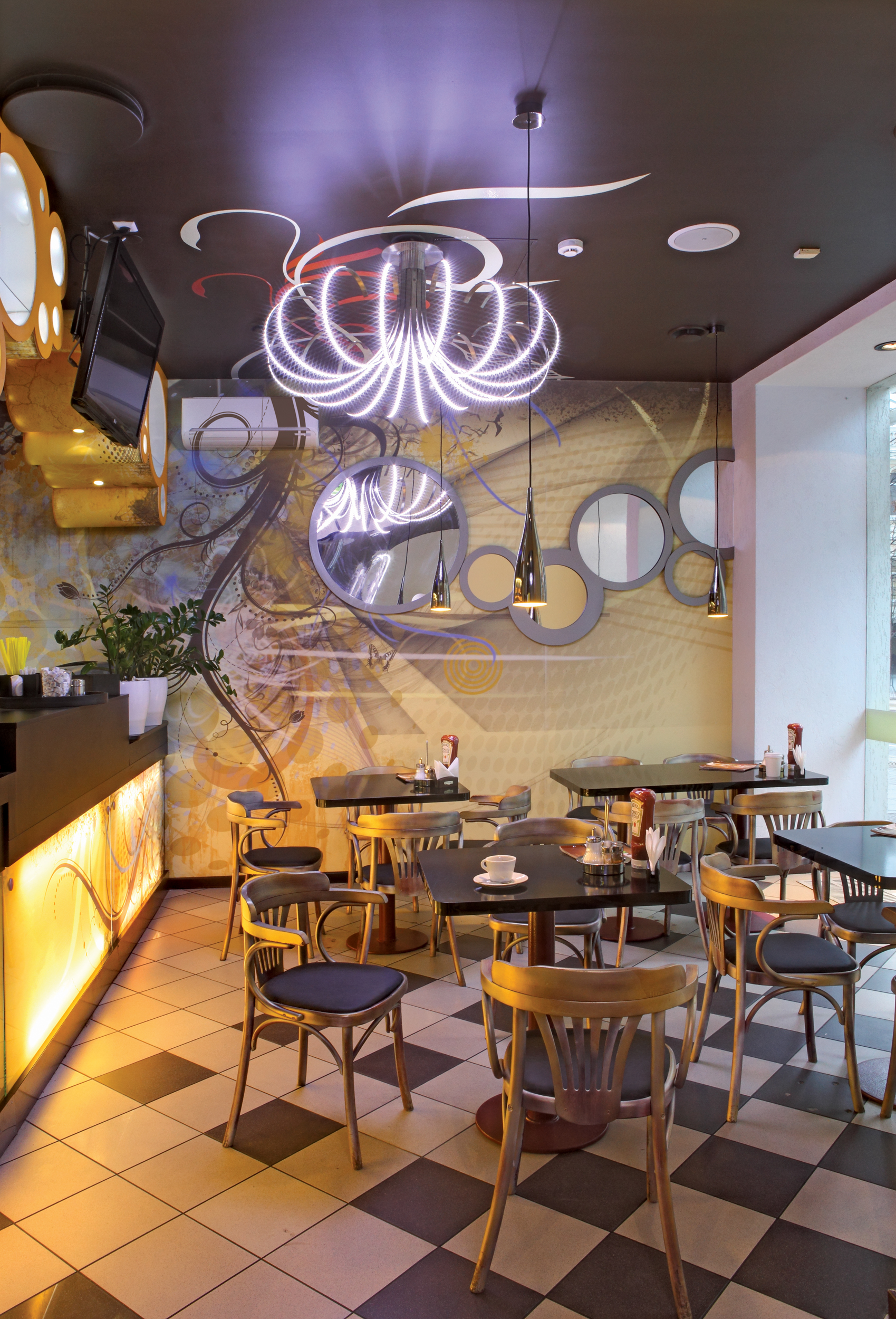 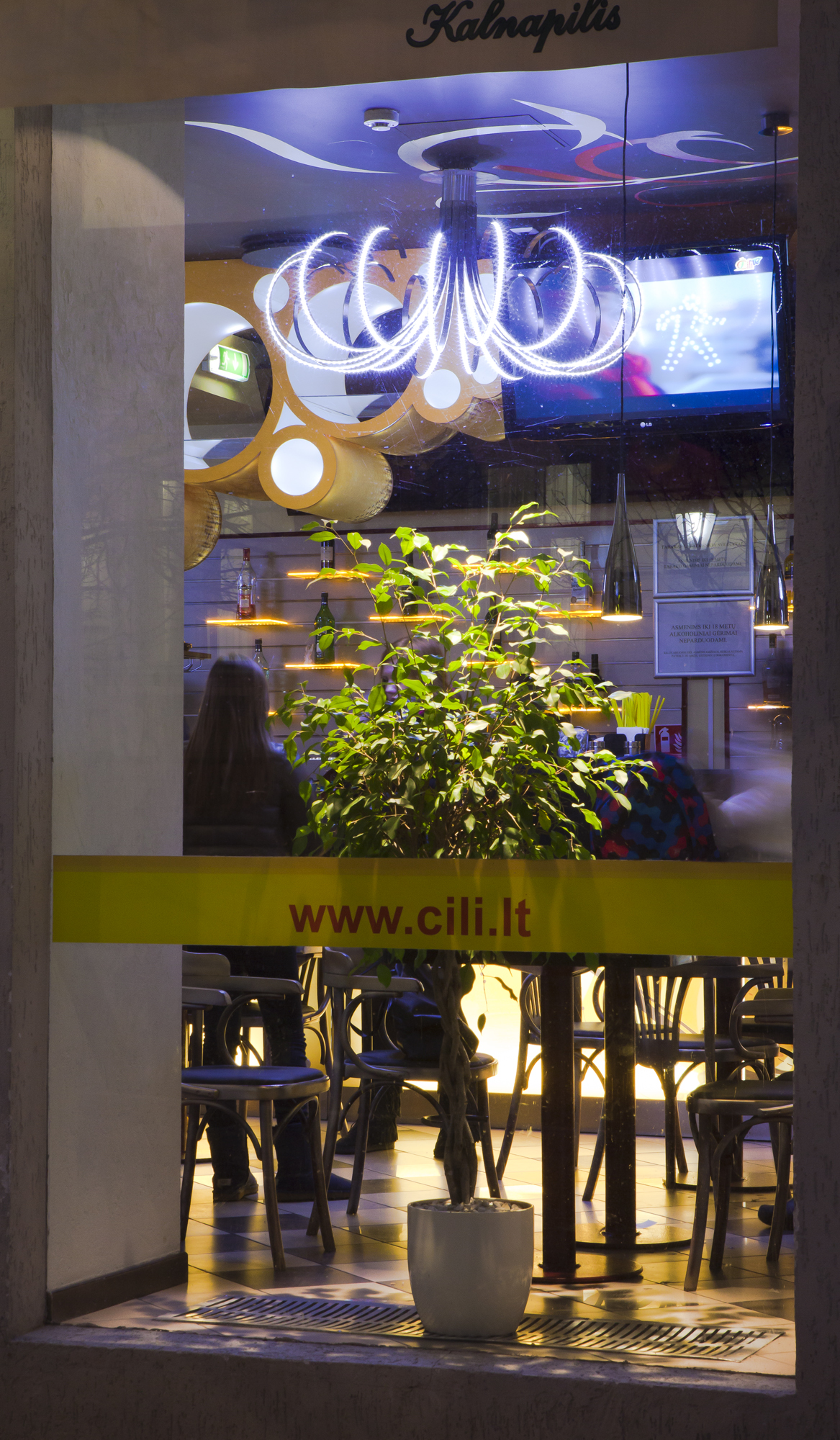 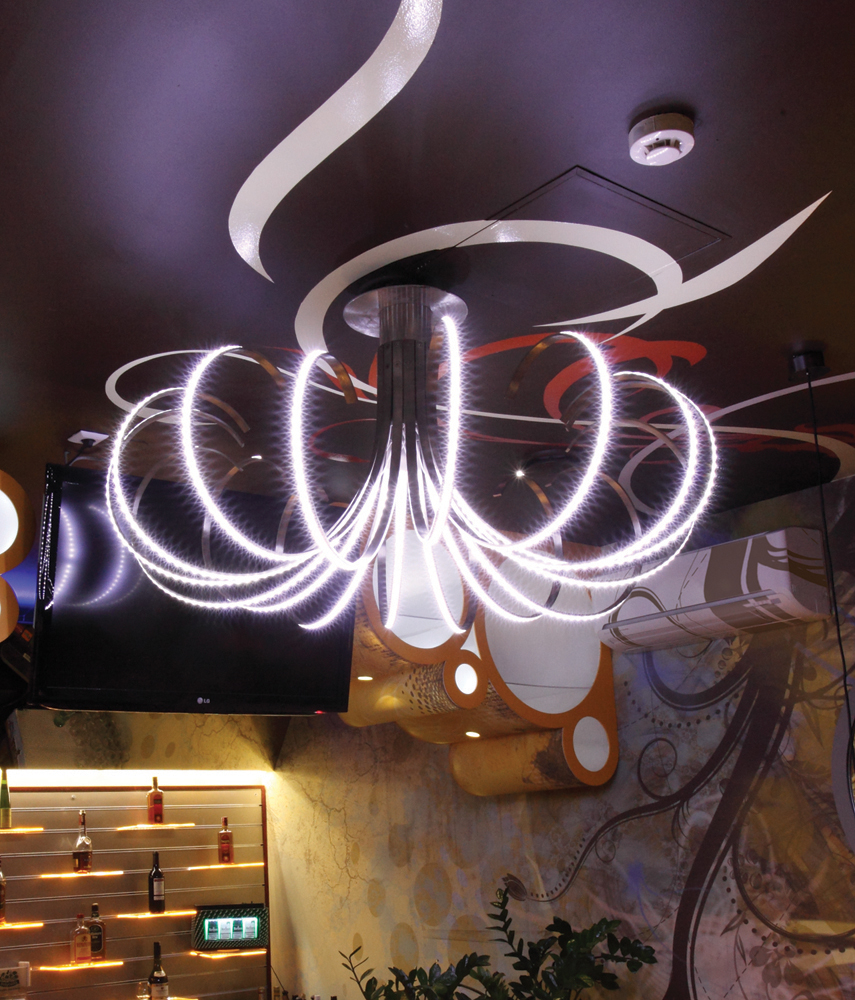 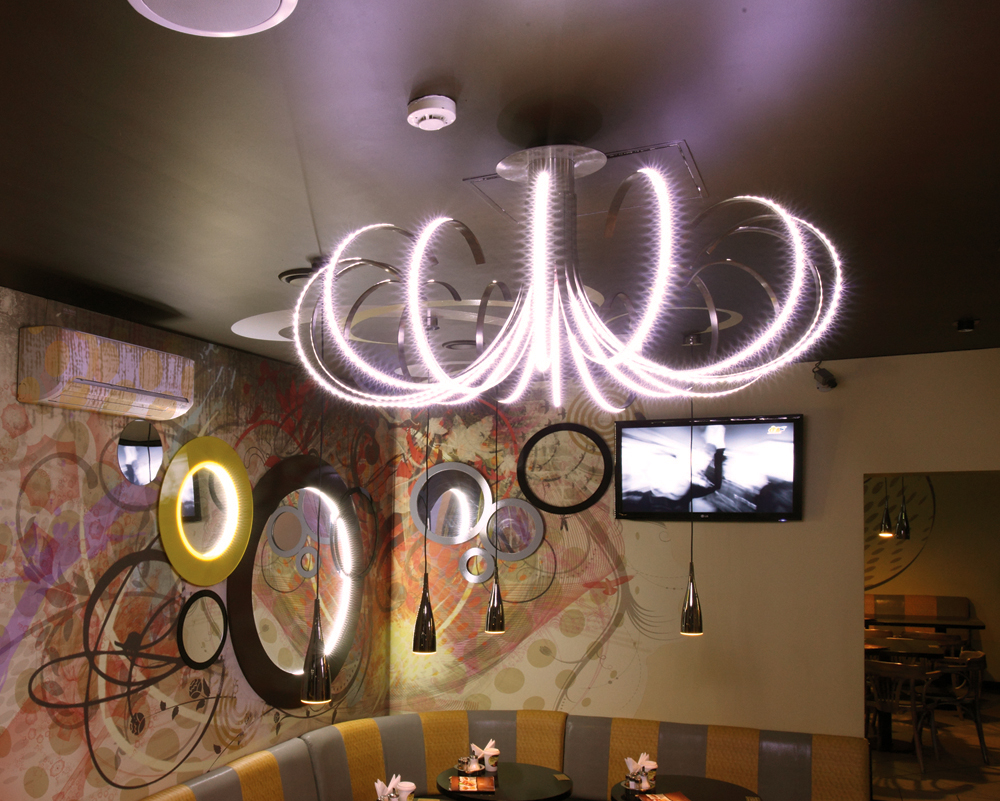 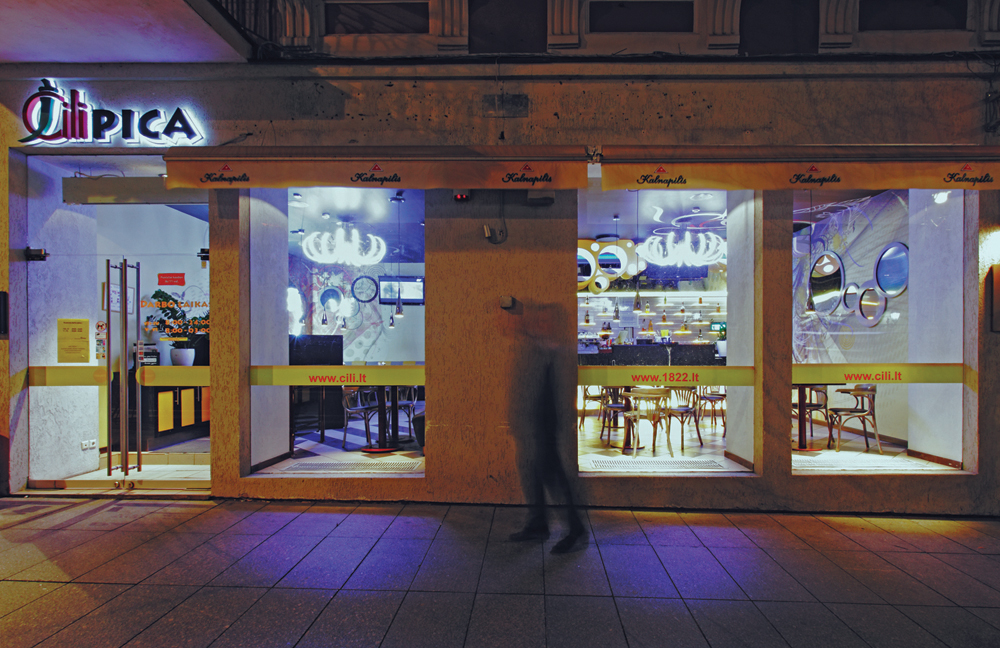 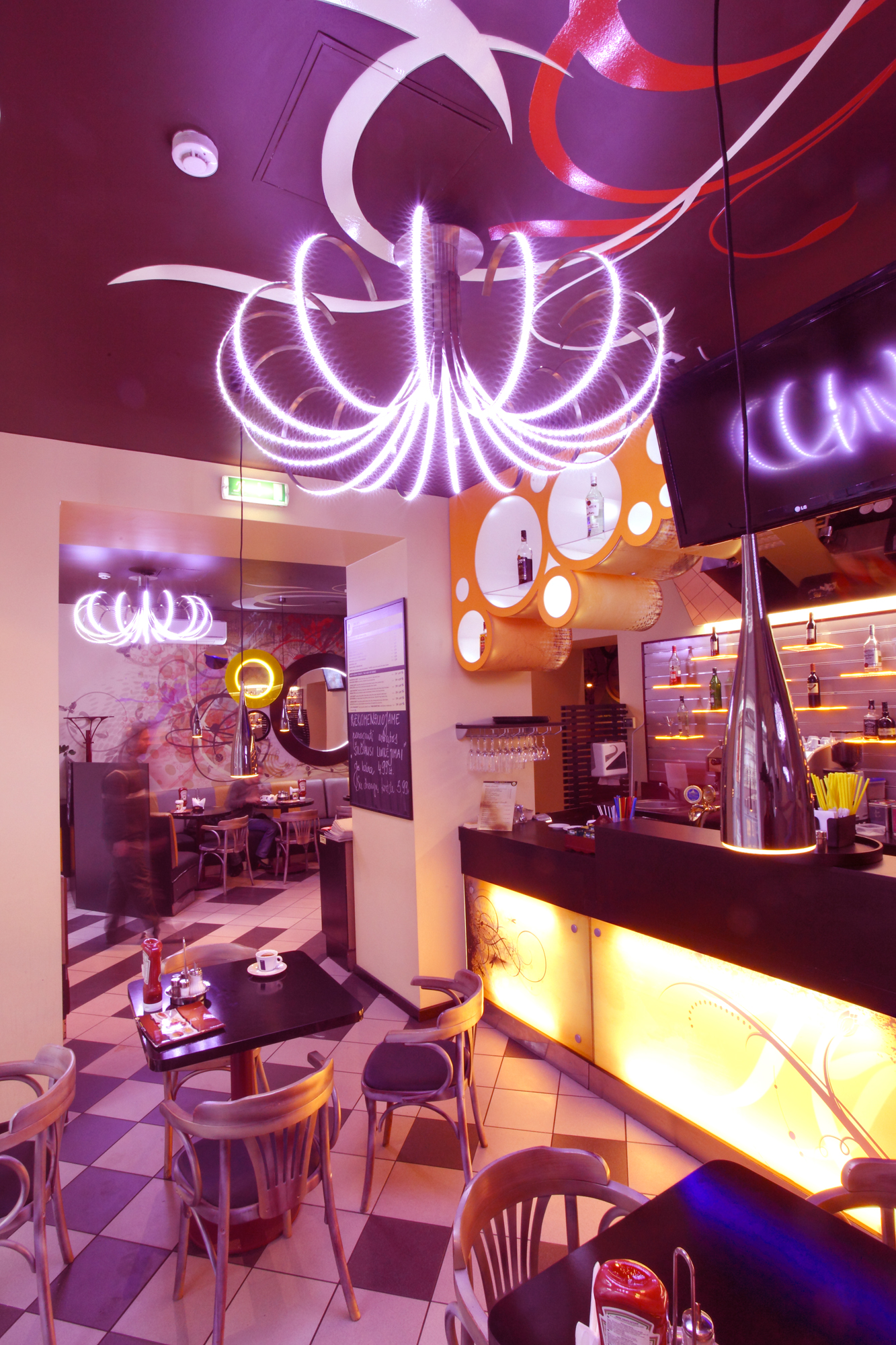 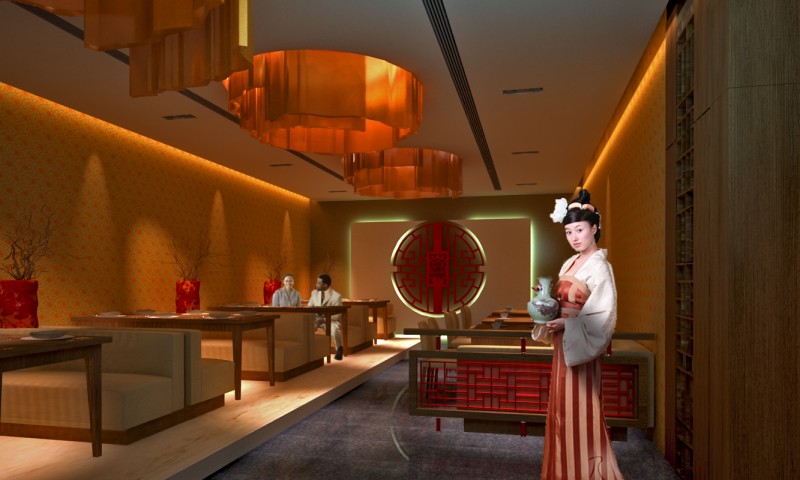 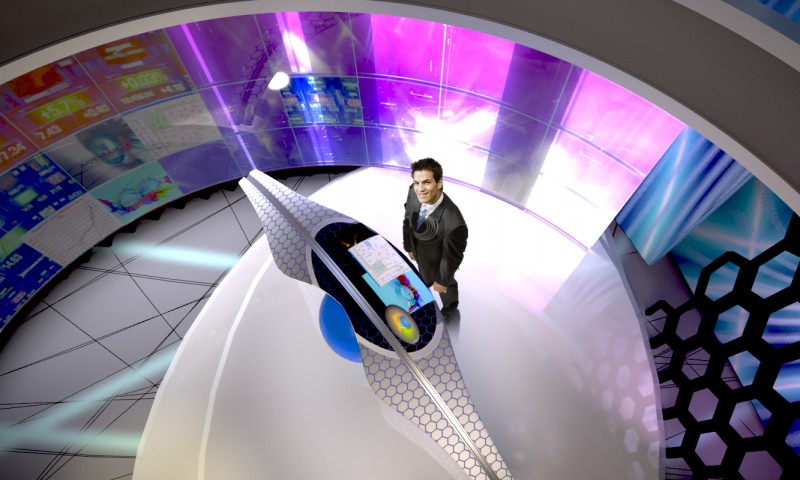 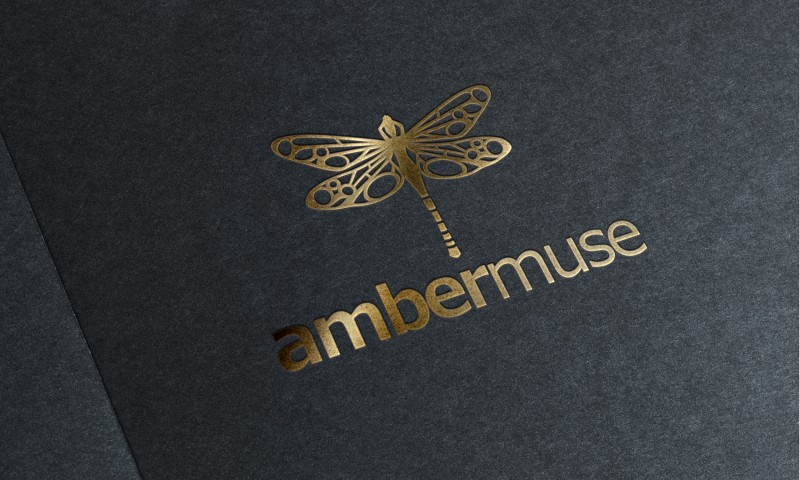 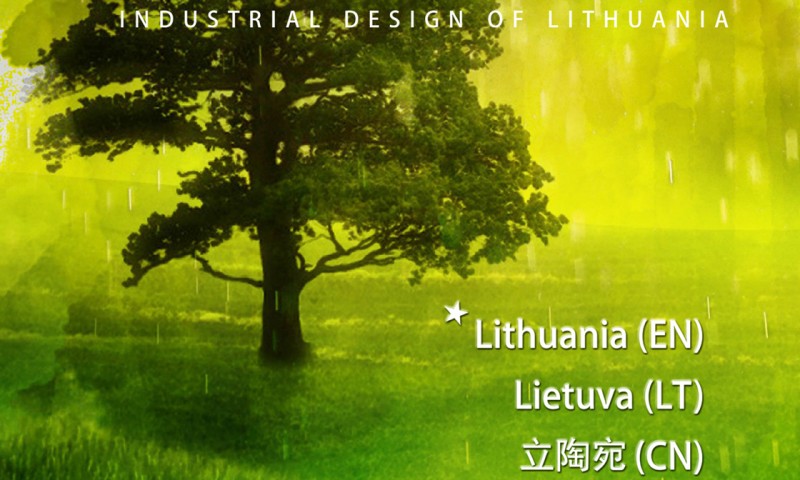